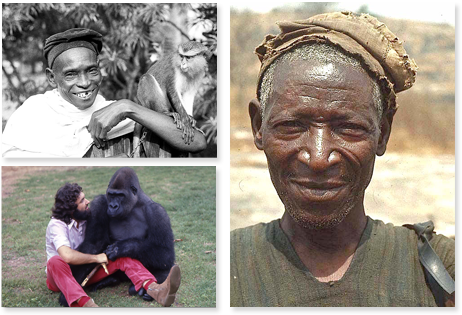 This website displays around 400 photographs of animals, people and places in West Africa; all enlarge on-screen at the click of a mouse.  I first travelled to Cameroon in West Africa with Gerald Durrell who had asked me to accompany him on an animal collecting trip there in 1957, when I was nineteen years old and had just left Chipping Sodbury Grammar School.  This trip was subsequently written up by Durrell in his book ‘A Zoo in my Luggage’.  I returned to West Africa in 1963, this time to Nigeria, where I then spent sixteen years as Curator then Director of the Zoological Garden at the University of Ibadan.  During that period I developed the Zoo from a small teaching collection attached to the Department of Zoology to the most popular public attraction of any kind in Nigeria.  The photographs here feature many animal species native to West Africa – some rarely photographed –  as well as people and locations.  They tell the story of my work and life in West Africa.  They also demonstrate that, as is evidenced by emails and other messages I receive to this day, a properly targeted zoo can be highly effective in stimulating and maintaining an interest in animals and indeed the natural world in people from many different backgrounds.  Please click on the headings across the top of this page to explore this website further.  Please note:-  the enlargeable images in the photo galleries on this website are designed to display on a desktop or  laptop computer screen;  they may not display in the same way on a tablet or mobile.

True Short Stories.  I am in the process of writing a number of true short stories based on my work at the Zoological Garden at the University of Ibadan, Nigeria, between 1963 and 1979.  I have now completed six such stories.  Most are somewhere between 14 and 20 pages long and include many photographs and illustrations.  All six stories are available here in PDF format and can be downloaded to your computer and  printed or read at your convenience.  They are:  –

*** New story June 2019  –  ‘CAN GORILLAS SWIM?’ – 10,000 w0rds, 23 pages.  I describe how two young gorillas were brought for sale (illegally) to the Zoological Garden and were confiscated from the vendors.  I describe the bizarre road journey across the city of Ibadan with the newly arrived gorillas; also how they first came into contact with water and how this influenced the design of a water barrier that was planned as part of a new ape building.  But… can gorillas actually swim?

To  access any of the six short stories above, simply click on the button ‘True Short Stories’  at the top of this page, then select a story.  Each story will appear on-screen as a PDF document that you can download, print and read when convenient.