Described below are a few of the many projects and developments in the UK and elsewhere with which I was involved after leaving Nigeria in 1979 and up to retirement in the UK in 2008.  I shall add other projects to this page from time to time:-

*  Consultant to the Wildlife Department of the Royal Society for the Prevention of Cruelty to Animals (RSPCA) during the planning and design phases of a new Wildlife Hospital.  The RSPCA project team was led by Dr Arthur Lindley, Head of their Wildlife Department.  I was commissioned by Dr Lindley to research and recommend specifications for treatment, recovery and pre-release facilities (including accommodation) for native invertebrates, amphibians, reptiles, birds and mammals, including small rodents, badgers, seals and deer.  The research was carried out over two or three months, during which I travelled to many different wild animal holding and hospital facilities all over the country.  I interviewed veterinarians, zoo curators and animal handlers, took copious notes, took a million photographs, took almost as many measurements and finally presented my findings and recommendations to Arthur Lindley.  Architects Berman Guedes Stretton Partnership, of Oxford, were then employed by the RSPCA to interpret my agreed recommendations and to work with me to produce the professional drawings for the hospital. It is thought that this project was probably the first purpose-designed wildlife hospital in Europe.  It was constructed in 1990/91 at East Winch in Norfolk within modified farm buildings purchased by the RSPCA specifically for this purpose – see top picture left.  It opened operationally in 1992 and was then opened formally in September 1993 by The Rt Hon John Gummer MP, Secretary of State for the Environment.  The hospital has become known as the RSPCA Norfolk Wildlife Hospital.

*  The design, implementation and initial operation of Tropical World, a walk-through tropical exhibit for Windsor Safari Park.  This exhibit was developed within a large, attractive, glazed building and included free-flying tropical butterflies, American alligators, hummingbirds, tropical plants (some specifically providing nectar for the butterflies), sound effects and a waterfall feature feeding water to the temperature-controlled pool for the American alligators – see second and third pictures down on left.  This exhibit was extremely popular with visitors to the Park.  Other new projects at Windsor included a Chimpanzee Exhibit with a building and walled ouside enclosure, a Children’s Zoo, an Education Department for schools with qualified and experienced teachers, and many other animal and non-animal developments and improvements.  During this five-year period under a new ownership/re-development team (in which I was Project Development Manager) from the mid to late 1980s, annual visitor attendances to the Park increased from around 500,000 (declining) to just under 1,000,000.  At the end of this period of re-development, Windsor Safari Park was awarded the annual trophy for contributions to tourism in that area by the Thames and Chilterns Tourist Board, one of the twelve Regional Boards of the English Tourist Board.

*  During the ‘Windsor period’ above, I was also Consultant to Marine World Africa USA, a wildlife park at Vallejo, California, during the planning and design phase of a new exhibit, Butterfly World.  This was similar in concept to the tropical butterfly and plant exhibit at Windsor and was the first exhibit of its kind in California.  There I was able to advise the project team on the design (including  the provision of internal environmental controls), fitting-out and stocking of the 6,000 sq ft building which opened to visitors in 1988.  Mike Demetrios, President of Marine World Africa USA, wrote “The fact that our butterfly house is a success and continually receives 97% to 100% good and excellent ratings in our surveys is testimony to your contribution”.

*  The implementation of various operational efficiences while I was Curator, then Park Director, at Cotswold Wildlife Park, Burford, Oxfordshire, as well as improvements to the marketing and promotion of the Park, the writing of a new Guide Book and the establishment of an Education Department for schools in association with the Oxfordshire Education Authority.  These and other changes resulted in a new record visitor attendance figure for 1983 of 343,000 and the beginning of a stronger financial operating base for the Park.  The annual trophy of the Thames and Chilterns Tourist Board for contributions to tourism in that area was awarded to me personally for the year 1982 – 1983.

While working at the Park and living in the Cotswolds was a delightful experience in many ways, my wife and I became concerned when our small son began to experience racial abuse at the local school.  We eventually decided that he needed to grow up in a more diverse, more cosmopolitan environment, and we moved back to Bristol, my home city, at the end of 1983.

*  The setting-up of my company, Natural Habitats Ltd, in 1988 and through this the development of new products such as custom-designed natural history videos and natural world-related sound mixes and effects;  also a range of custom-designed, back-lit graphics displayed on light box systems which I supplied to dozens of aquariums in the UK and mainland Europe up to 2008 – see fourth and fifth pictures down on left.  The London and Berlin Aquariums, as well as the National Marine Aquarium, Plymouth, all opened with these or similar products from Natural Habitats on display.  Natural Habitats supplied around 20 custom-produced interactive videos to the London Aquarium alone, with titles such as ‘Fish Senses’, ‘What is a Fish?’, ‘Fish as Parents’ and ‘Schooling’.

*  The production, in 1995, of a diverse package of sound effects for Legoland Windsor.  Because the subject material for this project was quite outside my usual field of the natural world, the project was particularly stimulating and challenging.  Legoland was constructing a new concept called Miniland at its highly successful visitor attraction at Windsor, with various activities and locations from all over the country reproduced in miniature using Lego materials.  There was a London Underground railway station, the open-air Minack Theatre in Cornwall with actors in an on-going play, changing of the guard at Buckingham Palace and 30 or 40 other scenarios, each requiring its own specially created sound mix.  (See Tower Bridge in Miniland at Legoland Windsor, sixth picture down on left).  I hired sound studios and sound engineers and put together teams of actors, actresses and professional voice-overs;  I also had to put together various one-off contraptions that could produce the sometimes unusual sounds required.  To my considerable delight (I was still fairly new to the business of audio production) the project went very well and production took place over several months.  Later, Lego asked me if I would also produce the sound effects for the new Legoland planned for San Diego, USA.  To my huge regret I had to  decline this opportunity due to other work commitments.

I may be contacted by email or telephone via the ‘Contact’ button above right. 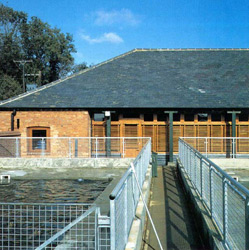